Recently, I had the honor of learning more about autism from my Yoga student and friend, Michel Pierce Burns.  She shared with me her son's book "Dawson" (The Extraordianry Discovery of an Autistic Child's Innermost Thoughts and Feelings www.dansonbook.com) 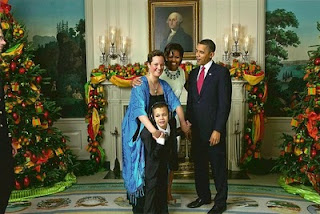 Danson was invited to the White House because President Obama got a copy of his book. After he and Michele got in through security, they had to wait a considerable amount of time until they could have a private audience and picture with the President and First Lady.  By that time, and given that large crowds and Danson don’t really mix, his senses were overwhelmed, and the Obamas walked in just as he was scratching Michele in the face. The Obamas were very calm and understanding as both Danson and Michele were weeping, and hugged them. 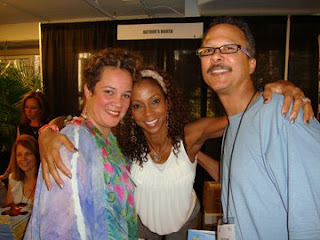 Actress, author, activist, and philanthropist Holly Robinson Peete's son, RJ's autism was diagnosised 10 years ago and she has been consistant in bringing awareness to the public.

Holly runs the nonprofit HollyRod Foundation, founded in 1996 during her father’s battle with Parkinson’s Disease, to help improve the quality of life of people plagued by a disease or disorder. After Holly’s son, RJ, was diagnosed with autism at age 3, hollyrod4kids was formed to focus on improving children's lives too. Holly has become an advocate and activist for autism education, outreach, and support.

Join her support and several other VIPs (Bill Cosby, Deepak Chopra, Susan L. Taylor)  for the event on January 10, at Carnegie Hall for the "Genius Of Autism"


Why:  Proceeds are for scholarships for families in need to attend McCarton programs (as well as SNACK, Only Make Believe, Strokes of Genius, Global Autism Project, and Music for Autism). We need McCarton Families to represent!


Please Contact: Suzanne Rubin srubin@mccartonfoundation.org for tickets and / or contributions

Laura Linney is the event's mistress of ceremony,
special tributes to the honorees will be made by:
Dr. William H. Cosby Jr. (Philanthropist and Entertainer),
Malaak Compton-Rock (Philanthropist, Founder Journey for Change and Chris Rock's lovely wife),
Susan L. Taylor (Writer, Editor Emeritus ESSENCE Magazine and Founder National Cares Mentoring Movement),
Holly Robinson-Peete (Actress, Talk Show Host and parent),
Opera Diva Leona Mitchell (original Carmen at the Met),
dre.dance (Actor Taye Digg's dance company)
Kelli O'Hara from South Pacific, Billy Porter Broadway performer and winner of Star Search and Deepak Chopra making cameo appearances!! And many more surprises.......
This is a night of music, laughter, and hope that you will never forget. Producers are McCarton Parent Daisy Chaplin and her dear friend Elizabeth Howell; Co-Chairs are McCarton Parents Roberta Lowenstein and Michele Pierce Burns and Parent Lou Toscano. Every performer and honoree is volunteering their time and all travel and hotel have been donated thanks to the tireless efforts of McCarton Development team and Co-Chair Lou Toscano. We hope this will be an annual event that will continue featuring the gifts of McCarton School students and young people on the spectrum worldwide. Proceeds are for scholarships for families in need to attend McCarton programs (as well as SNACK, Only Make Believe, Strokes of Genius, Global Autism Project, and Music for Autism). We need McCarton Families to represent! The 90-minute program is planned to be appropriate for ages 10 and up at your discretion. VIP Tickets are $500 and include prime seating and pre-performance cocktail reception with art exhibition from all honorees and meet and greet with performers. Regular tickets are $150. Please contact Suzanne Rubin srubin@mccartonfoundation.org TODAY for your tickets or use attached link! If you'd like to make a gift in someone's honor as a holiday present, we will promptly send a beautiful holiday card to them acknowledging your gift. PLEASE feel free to forward widely the invitation featuring the amazing art of GENIUS OF AUTISM honoree Stephen Wiltshire.
INTRODUCING THE 2011 GENIUS OF AUTISM HONOREES...
Justin Canha (age 21) Artist and Illustrator. Please see http://www.justinart.com/Pages/Oprah.htm to see Justin's beautiful work featured in O Magazine. He is represented by Roger Ricco Gallery in Soho and is donating a special piece to McCarton Foundation.
Kyle Cousins (age 21) Rock Singer/Songwriter (http://kylecousins.net/wordpress/ ) wrote the national theme song for Autism Speaks Walks "Everybody Wants to be Heard"
Emma Davis (age 10) and Noa Davis (age 12) Visual Artists and sisters from Queens, NY and have been featured on cover of Dr. Stanley Greenspan's ICDL Magazine and at galleries throughout NYC.
Amanda LeMunyon (age 15) Painter and Opera Singer (http://www.amandalamunyon.com/ ) has been invited to meet 2 United States Presidents after they purchased her art for the White House. She is also an accomplished Opera Singer studying with Leona Mitchell.
Joey Lowenstein (age 14) Double Black Diamond Snowboarder is at McCarton Upper School and has found his element on the mountain--he is fearless and inspiring!
Miracle Project's Fly Singers (www.themiracleproject.com ) Special performance by 3 kids from "Autism the Musical" lead by their incredible teacher Coach E.
RJ Peete (age 13) wrote the song "Come Into My World" that he performs with his mom Holly Robinson-Peete (Produced by Babyface Edmonds--video is here: http://www.hollyrod.org/).
Carly Ryan (age 24) Singer (http://www.youtube.com/watch?v=7f6DCC2HZAg&feature=related) is one of Dr. McCarton's favorite new singers :)--she comes to us from Manchester, England and was featured on British show "Autistic Superstars"
Matt Savage (age 18) Jazz Pianist (www.savagerecords.com) Many of us remember Matt's incredible performance at our 2009 McCarton Gala. At age 8 he was considered a jazz prodigy and has recorded several albums and played with many jazz greats. He is now a student at Berklee College of Music and balances classes, studies and concert gigs while maintaining a 4.0 GPA and achieving Dean's List status.
Scott Siegel (age 19) Front man "Arrest My Sister" (www.arrestmysister.com), this is an incredible alternative rock bank whose lead singer is on the spectrum.
Talina (age 11) Singer (http://talinaworld.com/whatsnew.cfm). No one can forget Talina's BRILLIANT performance at McCarton Gala 2010--she has performed at huge venues everywhere from a float at Columbus Day Parade, Times Square on New Years, to many national autism conferences and special events.
Danson Mandela Wambua (age 11) Poet and Author of DANSON: The Extraordinary Discovery of an Autistic Child's Innermost Thoughts and Feelings (www.dansonsbook.com). Danson is a student at McCarton Upper School who joins us fresh from his experience meeting President and First Lady Obama at a White House Holiday Party!
Stephen Wiltshire, Adult Artist who draws and paints detailed cityscapes (www.stephenwiltshire.co.uk) the GENIUS OF AUTISM invitation image was created by Stephen. He has been featured on countless television and newspaper stories--he has his own gallery in London and has very generously contributed 3 pieces to this event.

I am delighted about to be a part of promoting awareness of autism and will attend the upcoming event as press.  Let me know if you have any questions, in the comment box below.

Posted by YogaFlava@gmail.com at 11:08 PM